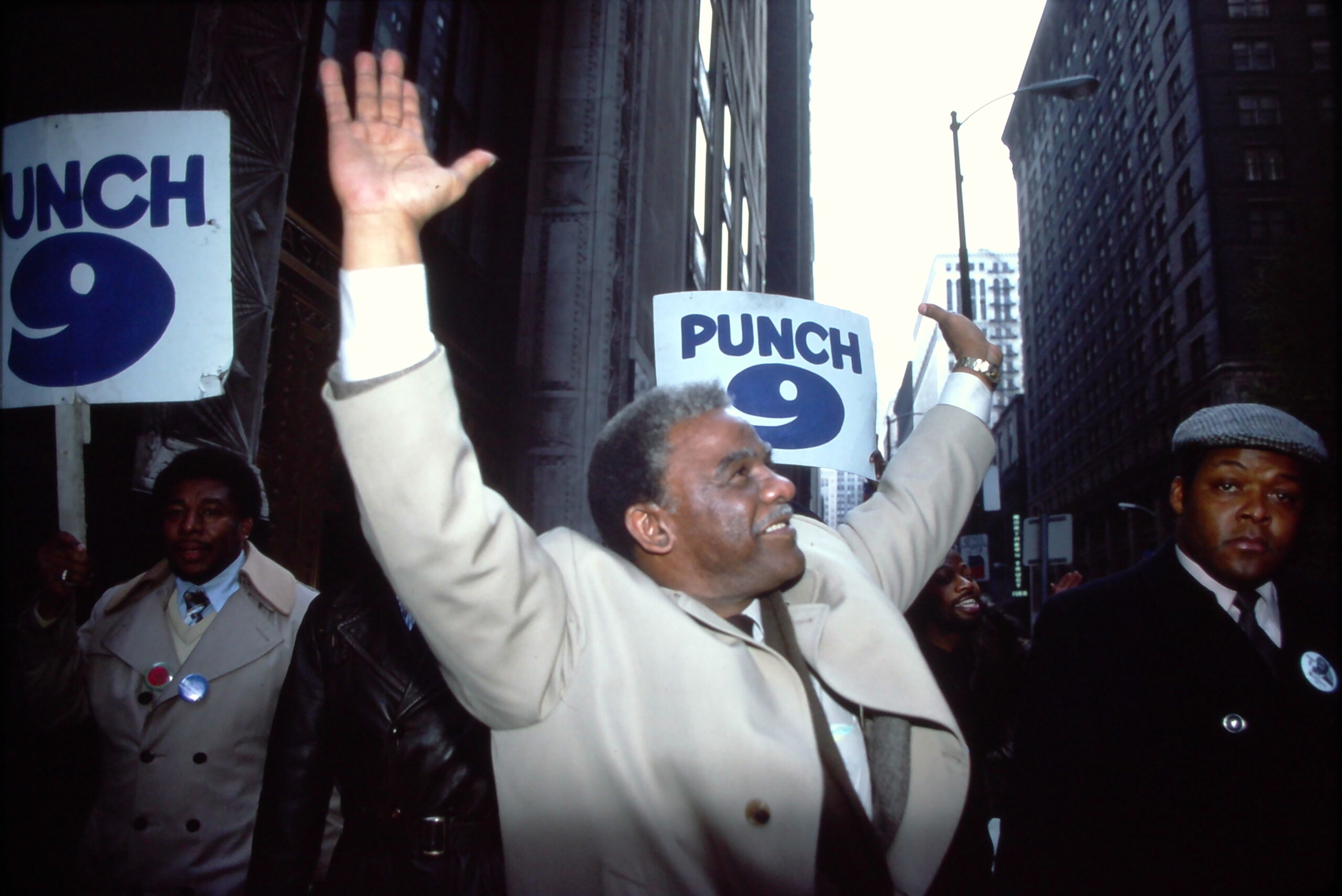 Barack Obama moved to Chicago in 1985, in part, because of a man he’d never met: Harold Washington. Obama later said: “For those of you who recall Chicago at that time, it’s hard to forget the sense of possibility that he sparked in people.”

“Punch 9 for Harold Washington” will be the first full-length documentary film to tell Washington’s story to national television audience. The filmmakers have gained access to the late mayor’s opponents as well as his supporters, which brings this drama, a capstone to the Civil Rights era, to life.

This is much more than a “Black first” story; “Punch 9” is a universal story about how underserved minority groups can gain and hold power. How to bring others on board? How to deal with adversaries who refuse to compromise? Perhaps most importantly, how can one person’s political victory create the foundation for lasting change?

Harold Washington ran for Chicago mayor in 1983 as a long-shot candidate. Chicago was then the most segregated large city in America, and although African-Americans were its largest single ethnic group, none had ever held citywide office.

Less than twenty years after the Voting Rights Act had become law, African-American mayors were taking the helm at dozens of cities across the country. Some, like Atlanta’s Manyard Jackson, have been recognized as Civil Rights pioneers. Others won the “hollow prize” of presiding over declining cities like Gary, Detroit and Newark, that Whites – and their money – had abandoned.

Chicago was a special case. It’s large African-American population was not a majority, so no candidate could win on Black votes alone. Also, in 1983, the city was still ruled by a strong, if declining, political machine that had been honed by the legendary Mayor Richard J. Daley — an political force which coveted the privileges its White Ethnic “base” had enjoyed for decades.

Harold Washington was a once-in-a-generation political talent. A bold populist who could galvanize crowds, he was also a devoted intellectual who sent reporters scrambling for their pocket dictionaries with words like “scurrilous” and “antediluvian.”

After toiling in the Daley Machine, for decades, Harold had paid his dues, and risen as far as a Black man was permitted. Now, he sought to destroy it – and he said so, in public, every chance he got.

Washington’s campaign launched with little money and no powerful backers. But his clarion cry to reform both the city’s racism and its legendary political corruption resonated with voters. His campaign became a movement, drawing passion from many groups who’d been left behind – such as Hispanics, gays, and women.

After his victory in the Democratic Primary, however, party bosses quickly abandoned their nominee for his previously obscure, but White, Republican opponent, Bernard Epton.

“Republicans didn’t matter in Chicago, then or now. They ran to be beaten,” journalist Laura Washington notes.

The Republican candidate’s slogan? “Epton for Mayor. Before It’s Too Late.”

In an incident that made international news, Washington and former Vice-President Walter Mondale were chased away from a church appearance by an all-white mob of Epton supporters.

Harold would immediately move to slash corruption and waste. He replaced incompetent political hacks and no-shows with talented young people. He appointed a cabinet that looked like Chicago, and fully half were women. His election showed what, by the 1980s, the Civil Rights movement could achieve through political means. But his opponents immediately turned on the fire hose.

On the new mayor’s very first day in office, an all-White majority of the City Council formed an opposition bloc that opposed Washington’s every move. City government ground to a halt. The Wall Street Journal called Chicago “Beiruit on the Lake,” a metropolis riven by civil war.

As Alderman Dick Mell, a leader of the opposition, told us, “It was going to be all or nothing. We controlled the votes.”

But Washington never backed down, and eventually he prevailed and kept his promises of reform. Harold truly believed in fairness as an organizing principal. While city council members spread fear of AIDS patients, Washington became Chicago’s first mayor to lead the annual Gay Pride Parade. He became an international figure, a symbol of American ideals, a leading critic of President Ronald Reagan, and a significant power broker in the Democratic Party.

Rev. Jesse Jackson drew inspiration from Washington to form his “Rainbow Coalition” and surprise the Democratic Party establishment during his 1984 and 1988 runs for President. Later, Barack Obama would inherit some of Washington’s key political advisors, and their organizing tactics.

As Washington made good on his promise to be “fairer than fair,” White resistance began to soften. He demonstrated that good government could be good for everyone. Washington won re-election in 1987.

The mayor boasts, “There was a time when you said “Chicago,” and someone would respond, like a Pavlovian dog, ‘segregation.’ But now, anywhere in the world you go, Israel, Egypt, Rome, Shanghai, Tokyo, Nairobi, Zimbabwe…. you go to any of those places, and you say you’re from Chicago, you know what they’ll say to you? ‘How’s Harold?’”

As author Gary Rivlin says, “in the Reagan era, in conservative times, here was this beacon in the Heartland.”

Six months later, Harold collapsed at his desk and died.

His coalition quickly broke apart, but not until it had changed Chicago forever: no one could be excluded from the political process. Just as importantly, Harold Washington showed a new generation of leaders how activism and politics can work together to create meaningful, lasting change.

The story of Harold Washington could not be more timely. Racism in American politics has taken an ugly turn, while at the same time, minorities and women are gaining new political power. A showdown is inevitable.

“Punch 9 for Harold Washington” showed how the Civil Rights movement paved the way for political change, in an example that today’s leaders could emulate.