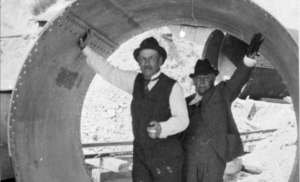 Flood in the Desert

One episode, one hour total

The Flood in the Desert tells the dramatic story of the March 1928 St. Francis Dam’s collapse and its aftermath, the second deadliest disaster in California history. The resulting flood killed over 400 people, destroyed millions of dollars of property, and washed away the reputation of one of the most celebrated men in Southern California, William Mulholland. A self-taught engineer, Mulholland had ensured Los Angeles’ remarkable growth by building a cement aqueduct that piped water from the Owens Valley across the Mojave Desert and into the arid city, 233 miles away. But the bursting of his St. Francis Dam, the city’s largest single reservoir, was a colossal engineering and human failure.

Rob Rapley has written, produced and directed a number of films for American Experience, including, most recently, Voice of Freedom and The Man Who Tried to Feed the World. Other films for the series include The Secret of Tuxedo Park, episode three of The Great War and Murder of a President. Three previous films for the series — The Poisoner’s Handbook, The Abolitionists and Wyatt Earp — received two Emmy nominations, a Writers Guild Award, a Writers Guild Award nomination, a Western Heritage Award and a Western Writers of America Award. Rapley also produced the first episode of Henry Louis Gates’ Reconstruction, The Greely Expedition, Buffalo Bill, Trail of Tears and two episodes of the acclaimed PBS series on the Supreme Court. He was previously nominated for Emmy Awards for his work on Bill Moyers’ Becoming American: The Chinese Experience and Loosely Mozart: The New Innovators of Classical Music.