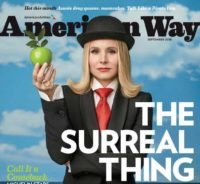 Filmmaker Ken Burns’ delves into the roots of Country Music. We sat down with him to find out why.

Ken Burns is America’s best-known documentary filmmaker. Since 1990, his PBS documentaries have illuminated topics such as jazz, Frank Lloyd Wright, baseball, the Civil War and the Roosevelts. But in his latest series, Country Music: A Film by Ken Burns (premiering Sunday, September 15, and airing for seven more nights), Burns tackles a genre that is more complex than you might think. He spoke with American Way about the project and why country music continues to have such resonance.

American Way: With Country Music, it seems like you’re stepping out of your comfort zone. How much did you know about it before this project?

Burns: I wasn’t much of a country music lover growing up. I was a child of rock ‘n’ roll and R&B. I worked at a record store in the late 1960s and in ’70-’71 in Ann Arbor, Michigan [and learned a bit about country]. I knew going into this, though, there were hugely important stories there to be told.

Why is it important?

Country music encompasses so many styles—early blues, hillbilly music, bluegrass, western swing, rockabilly. How do you define it?

It never was—even at the beginning—one thing. If you listen to [blues-oriented] Jimmie Rodgers and [the rustic mountain music of] the Carter Family, they don’t sound anything alike. Country is just omnivorous. It’s honky-tonk, it adds the Deep South blues, the [string-laden, uptown] Nashville Sound. It has all these umbilicals to R&B, to jazz, to rock and to blues itself. It was never ever one thing to begin with, and it is certainly not one thing now.

“It’s just simple ways of telling stories, experiencing and expressing feelings. You can dance to it. You can cry to it. You can make loooooove to it. You can play it at a funeral. It just really has something in it for everybody, and people relate to it.”
—Dolly Parton, legendary singer-songwriter, actress, businesswoman

What might surprise someone who’s not a student of the genre?

My biggest interest is the way we [as a culture]  sort of ignored and segregated any discussion of race. It’s no accident that the folks who deserve to be on the Mount Rushmore of early country music—A.P. Carter, Jimmie Rodgers, Hank Williams and Johnny Cash—all had musical mentors who were African American. And then there’s Ray Charles [who had numerous country hits] and the jazz influence in the phrasing and guitar playing of Willie Nelson and Chet Atkins. [If not for those influences], all of a sudden you don’t have Elvis and you don’t have Johnny Cash, [early African-American Grand Ole Opry harmonica player] DeFord Bailey, all the way through Charley Pride and Darius Rucker. People listen to other people’s music and adapt to it.

Why did you focus as much as you did on women in country music?

Working on this film we found that women are at the center of this story. Loretta Lynn was like a proto-feminist. The year women’s liberation was coined, she’s writing “Don’t Come Home A-Drinkin’ (With Lovin’ On Your Mind).” She wouldn’t consider herself a feminist and neither would many of her fans, but somebody was speaking for women. There was a powerful sisterhood of country music stars, such as Rose Maddox, Kitty Wells and Dolly Parton, who were articulating themes that nobody else was touching at the time.

What was one of your biggest surprises in the making of this series?

I find it thrilling that The Beatles, every single one of them, has country music as an influence. And we see how Bob Dylan has to go to Nashville to sort of revitalize his music.

Why are some Americans hesitant to embrace country music?

We make jokes about country music, but that’s because we can’t deal with the two four-letter words that country music is all about: love and loss.

You also held a concert at Nashville’s Ryman Auditorium to be shown on PBS. What was that like?

Rhiannon Giddens did [Patsy Cline’s] “Crazy,” and there was Vince Gill’s version of “I Will Always Love You” [written by Dolly Parton, made a classic by Whitney Houston]. We had Rosanne Cash singing [her father, Johnny Cash’s] “I Still Miss Someone,” Dierks Bentley singing “Are You Sure Hank Done It This Way?” [by Waylon Jennings]. It was so much fun. All the musicians backstage said, “How come we never do this?”

After working on the film series, how does country music fit into your vision of the U.S.?

America’s strength is an alloy, a combination of things—the complexity, the majesty, the controversy. I believe music works the quickest and the fastest [to bring folks together]. Two notes and you begin to feel something. The reason we’re drawn to particular film subjects, be it jazz or baseball or country music, is that they offer us an opportunity to re-remind people that there is an ultimate power in “us” and in the U.S.

What’s next for you, and what does it mean to you to tell these incredible stories?

We have a new documentary coming out on the American Revolution. Yes, [it will be] about powder-wigged guys in Philadelphia. It’s also about shopkeepers, it’s about slaves, it’s about Native Americans, it’s about women. The barriers we build between ourselves are artificial. As Wynton Marsalis says, art tells the tale of us coming together.