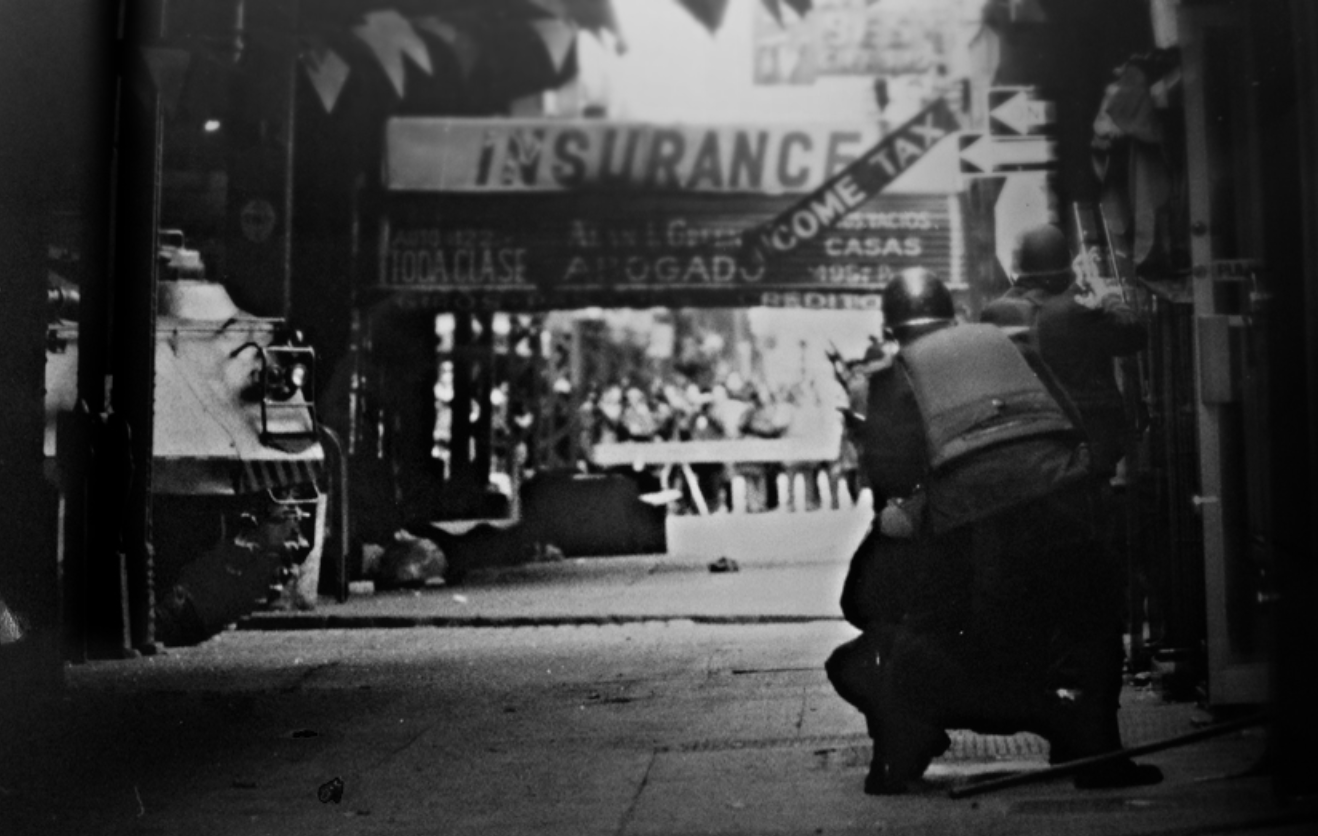 Shuaib Rahim pointed his snub-nose .22 at storeowner Jerry Riccio and demanded guns. But the holdup went terribly wrong when the NYPD arrived and mistook Shuaib and his friends for members of the Black Liberation Army, a violent revolutionary group who were murdering NYPD officers. Thus began, on January 19, 1973 in Williamsburg, Brooklyn, the longest hostage siege in NYPD history. A pivotal moment in the history of American policing and race relations, it was poorly understood at the time, and is little known today. Soon Shuaib and his friends were desperately firing high-powered rifles into the rain-slicked Brooklyn streets at NYPD officers huddled behind engine blocks. Heavy shells capable of taking down a bull moose ripped through patrol cars and boomed under the looming el track. Inside the store, twelve hostages, among them women and children, cowered from police bullets in a firefight police likened to Vietnam or World War II. When a high-velocity bullet hit Emergency Services Officer Stephen Gilroy in the head, he fell dead on the spot. Shuaib and his friends were now cop-killers. Hundreds of mostly Caucasian officers poured into Williamsburg from the five boroughs, intent on rescuing their brother officers and carrying out standard NYPD operating procedure: executing the gunmen with scant regard for the hostages. With New York besieged in the 60’s and 70’s by violent street protests and groups like the FALN, Omega 7, JDL, Black Liberation Army, and the Weathermen, many in the NYPD felt it was dangerous to let a cop-killer live. Into this standoff came Harvey Schlossberg, a diminutive Brooklynite intellectual with a wry smile. A Jew on the mostly-Irish force, he was the first NYPD cop to get a doctorate in psychology. Unlike his brethren, Harvey was sickened by the sight of violence. He believed in radical empathy and the redemptive power of talk. Hold Your Fire chronicles Harvey’s battle against his powerful superiors, who were steeped in a century of entrenched NYPD authoritarianism and male strength. They wanted to assault the building, worried that if they failed to take strong action and hostages were killed, public blowback would be swift and merciless. One of Harvey’s most crucial precepts was ‘dynamic inaction’; for police to do nothing and let cooler heads prevail. But gunshots from inside the store raised NYPD fears for the safety of the twelve hostages, who included women and children. Further heightening tensions, one of the gunmen lay bleeding inside from a gunshot wound to his abdomen, while store owner Jerry Riccio plotted to retrieve his 9mm handgun and shoot his way to freedom. To make matters worse, crowds outside began to mass at police barricades, pelting police with bottles and rocks. If police stormed the building, massive riots seemed certain to cause widespread casualties. At a time of 1970’s urban decay, it seemed that Brooklyn, the last bastion of urban multiculturalism, was going to burn. Dr. Schlossberg counseled the NYPD brass not to issue ultimatums which could provoke violence, and kept buying time so his radical talk therapy could stave off a bloodbath. Luckily his cause was aided by the hostages. Under the noses of Shuaib and his gun-toting comrades, owner Jerry Riccio painstakingly carved an escape hatch in a sheetrock wall and after 44 hours of captivity, led the hostages through an abandoned staircase to freedom. Then, against all odds, the NYPD managed to convince Shu’aib and his desperate cohorts to talk. Amidst great violence and mistrust, words finally triumphed over bullets. Director Stefan Forbes has been welcomed into this unique story from all sides. He has traveled to Arizona to interview traumatized hostages, to Attica Penitentiary interviewing gunmen, and to Crown Heights, Brooklyn for twelve-hour tear-soaked interviews with Shuaib Raheem. Since his controversial parole, which was front-page news in New York, this spiritual man has been tormented by guilt over his role in the siege. He earned a degree in theology while incarcerated, also serving as an imam resolving gang conflicts. He is currently mentoring youth in violence-ridden Brownsville and working in the restorative justice field, desperately seeking redemption for his youthful errors and inspiring many seasoned veterans of the nonprofit sector with his insightful work.

America today is a nation racked by police violence, racial division, and conflict. Dr. Schlossberg’s teachings offer a road map out, having proven their worth in resolving some of the most violent and tense situations imaginable. Our nation has urgent lessons to learn from Harvey Schlossberg’s empathy and belief that dialogue is possible even while bullets are flying. His form of modern crisis negotiation is estimated to have saved 40,000 lives globally yet, tragically, it has never been fully implemented by U.S. law enforcement. In a country fraught with violence since our inception – a fact police officers openly lament on camera, discussing their struggles with alcoholism and broken families – it’s crucial that we discuss and address America’s toxic male legacy. In Hold Your Fire we’ll witness how the guns Shuaib desperately seeks as a source of power and self-defense ultimately strip him of power. The store, bristling with guns and ammo, in which Shuaib barricades himself along with terrified hostages, becomes a metaphor for the wounded male psyche: overly armored, unreceptive to dialogue, and bristling with defensiveness and hostility. This film excavates a misunderstood, crucial moment in the long relationship between the NYPD and people of color, especially Muslims. In intensely powerful interviews, those on all sides of this traumatic event recount complex journeys toward healing.

Producer/Director/Cinematographer Stefan Forbes is a winner of the International Documentary Association’s Jacqueline Donnet Emerging Filmmaker Award. His first feature film was the 2008 documentary film Boogie Man: The Lee Atwater Story, about the life of political operative Lee Atwater. Boogie Man played at both the Democratic and Republican National Conventions, played in 40 U.S. cities theatrically and was broadcast on PBS’s Frontline, the BBC’s Storyville, the CBC, and other networks worldwide. It was a Critic’s Pick in The Washington Post, New York Times, and London Sunday Times, and received an editorial in The New York Times on the film’s relevance to the 2008 Presidential election.

Mr. Forbes is a 2006 New York Foundation for the Arts Fellow and serves on their Artists Advisory Board. He has spoken on film at many American universities and industry panels such as Digital Hollywood, and served on juries at Silverdocs, the Writers Guild of America Awards, and on the Nominating Committee for the Independent Spirit Awards.

Consulting Producer Sam Pollard’s professional accomplishments as a feature film and television video editor and documentary producer/director span almost thirty years. His first assignment as a documentary producer came in 1989 for Henry Hampton’s Blackside production Eyes On The Prize II: America at the Racial Crosswords. For one of his episodes in this series, he received an Emmy. Eight years later, he returned to Blackside as Co-Executive Producer/Producer of Hampton’s last documentary series I’ll Make Me A World: Stories of African-American Artists and Community. For the series, Mr. Pollard received The George Peabody Award.