When Taylor Barton first learned about pioneering 19th-century nurse Clara Barton, she wondered whether their common last name might not be just a coincidence.

“I’ve always been interested in the Red Cross and Clara Barton, because when I was younger I thought everyone with the last name Barton was related to me,” says Barton, a rising senior at Donegal High School. 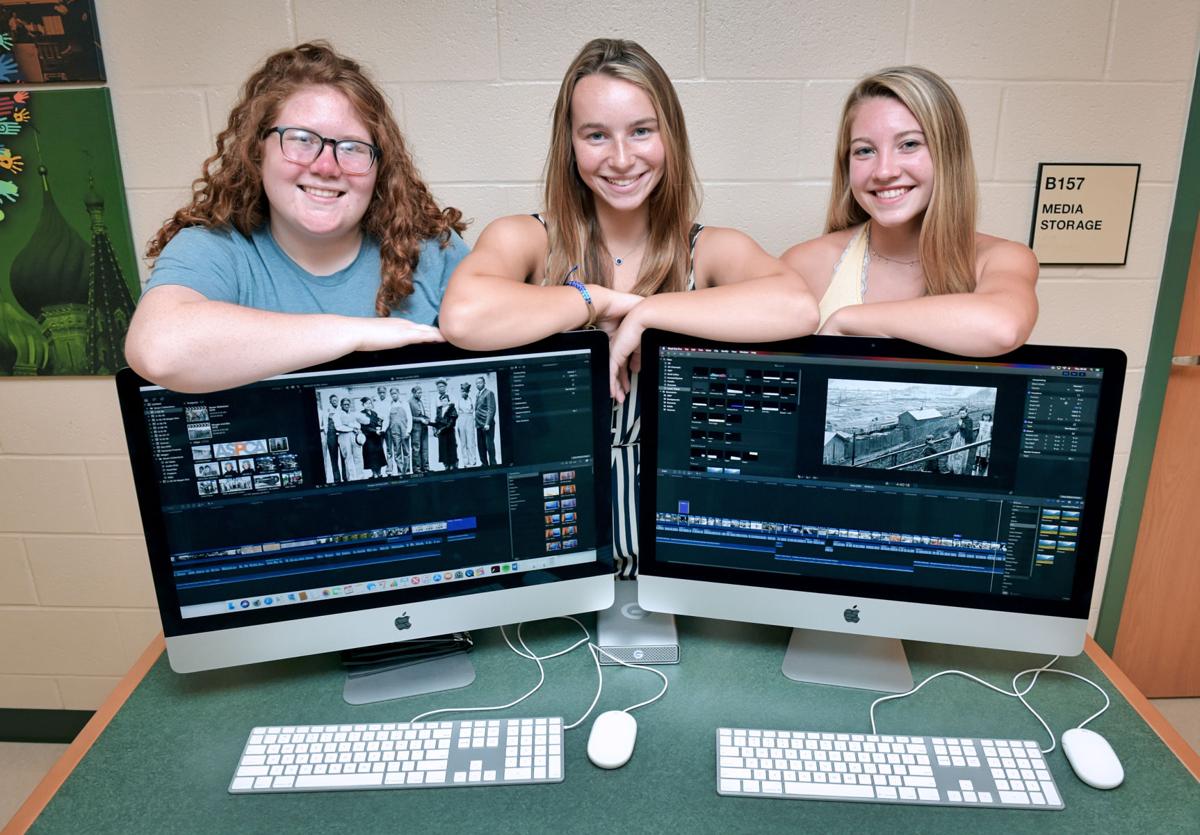 From left, Ella Warburton, Morgan Creek, and Taylor Barton are three Donegal High School students who have found success with their National History Day documentaries. They’re photographed at the computers were they edited their films.

Although they’re not kin, Barton was able to use her interest in the Red Cross founder’s relief work after the Johnstown flood of 1889 to win two national history awards.

She’ll also get to meet a famous filmmaker.

And it also earned her the notice of documentarian Ken Burns, famous for his PBS documentaries on such topics as the Civil War, jazz and baseball.

Barton was named one of six recipients of the new Next Generation Angels awards, created by Burns’ Better Angels Foundation to encourage a new group of young documentarians.

Barton will meet Burns in October, when she and the other top winners in the National History Day documentary category travel to Washington for three days of touring such institutions as the American Film Institute and the Library of Congress.

Barton wasn’t the only Donegal student to gain recognition with a National History Day documentary this year.

Ella Warburton and Morgan Creek, both of whom graduated earlier this year and will be attending Gettysburg College in the fall, had their National History Day film about the 1930s Scottsboro Boys case shown in a national venue.

Because Warburton and Creek’s documentary, “Lonesome Jailhouse Blues,” advanced to the national competition, they were able to submit their project to a film festival. Their film was screened last month in the Oprah Winfrey Theater of the National Museum of African American History & Culture in Washington.

“It was amazing,” Creek says, seeing their film on a big screen “in a theater that shows real documentaries. I just felt so accomplished.”

So what explains the National History Day success of the Donegal High School students?

“I give all the credit to the students,” says Sara Frazier, Donegal library media specialist. “They picked their own topics that they’re passionate about, and then they run with it.”

Frazier and Susan Heydt, a gifted-education teacher at the school, co-teach the year-long National History Day class at Donegal.

“Once we get an idea of what they’re interested in, what they’re passionate about, we help guide them,” Frazier says.

“We’re not teaching content,” Heydt says. They’re teaching the students research techniques and, for those making documentaries, how to use sophisticated film editing software, she adds.

Founded in 1974, National History Day is a nationwide history education program for middle and high school students. It has regional, state and national competition levels.

Students can create a documentary, website, performance or exhibit, or write a paper about their chosen topic.

This year’s National History Day theme was “Triumph and Tragedy.”

Barton, who eventually plans to go to medical school, is especially interested in medical topics in history.

“Last year … I made a documentary about the great plague of London of 1665,” Barton says.

She originally was interested in finding out how the Red Cross dealt with the diseases that broke out in Johnstown after the devastating flood.

But she wound up concentrating on Barton’s work in providing housing, food and other services to those who’d lost everything.

For Warburton and Creek, the genesis of their project came in English class, during a discussion of the Ralph Ellison novel “Invisible Man.”

Their teacher told them about the Scottsboro Boys, a group of African American men who had been unjustly charged with raping two white women in Alabama in 1931.

Their story involves complex legal battles that took their case to the U..S. Supreme Court, but left many of the men in jail for years, subject to the harsh conditions of the Southern prison system of the time.

The students’ documentary follows the case through the courts, and details the support the defendants received from Communist and labor groups.

“Last year (for National History Day), I wrote a paper on Russian feminism during the Russian Revolution,” Creek says. “This year, I wanted to do something different.”

Warburton had the documentary skills, having entered a History Day film every year since seventh grade.