The filmmakers Elizabeth Coffman and Mark Bosco will be awarded the first Library of Congress Lavine/Ken Burns Prize for Film, which comes with a $200,000 finishing grant. 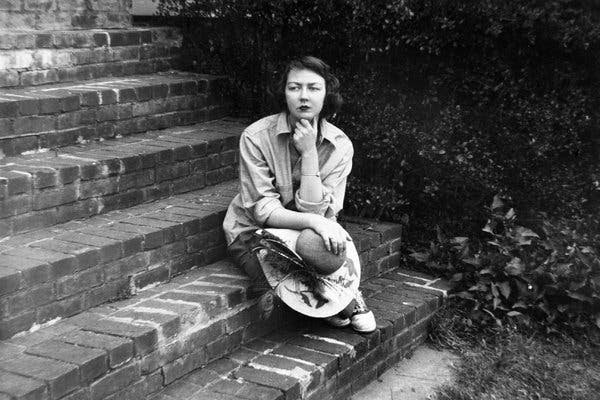 Flannery O’Connor sitting on the steps of her home in Milledgeville, Ga. in 1959.CreditCreditFloyd Jillson/Atlanta Journal-Constitution, via Associated Press, courtesy of the filmmakers.

A new film about the life and writings of Flannery O’Connor will receive the first Library of Congress Lavine/Ken Burns Prize for Film. The award was announced on Wednesday by the Better Angels Society, the Library of Congress and the Crimson Lion/Lavine Family Foundation.

The new prize, made possible by the nonprofit Better Angels Society and the Boston-based philanthropists Jonathan and Jeannie Lavine, was created to recognize documentarians who focus on some aspect of American history. The prize includes a $200,000 grant for costs associated with postproduction, outreach and marketing, as well as a consultation with Ken Burns and his production company, Florentine Films.

“I remember for me way back with my first film, that last money was the hardest to come in and such a relief” when it did, Mr. Burns said in a phone interview. He added the money could go toward “the final prints, the final corrections, the final edits, to pay the rights to the footage or the photographs or whatever it might be.”

Before selecting a winning film with the Librarian of Congress Carla Hayden, six films were pared down from a total of 80 submissions and reviewed by a jury of academics and filmmakers. It was from those finalists that Mr. Burns and Dr. Hayden chose “Flannery,” a biographical documentary about the Southern Gothic writer directed by Elizabeth Coffman and Mark Bosco.

Dr. Bosco, a Jesuit priest and professor at Georgetown University who’s written about Ms. O’Connor (she died in 1964), said that he was initially interested in the writer’s Catholic faith, but was also struck by the way her writing tackled the same racial divides our country is confronting today.

“She’s so contemporary and, in many ways, she’s writing for a nation that always thinks it doesn’t have to deal with its latent racism and, yes, it’s still there,” he said in a phone interview.

The film grew from a collection of archival interviews with people close to Ms. O’Connor, which Dr. Bosco received in 2007. After consulting Dr. Coffman, an associate professor at Loyola University Chicago and a seasoned documentary filmmaker, they started to raise money and move forward with the project in 2013, conducting archival research and interviewing writers and celebrities including Alice Walker, Tobias Wolff, Tommy Lee Jones and Conan O’Brien.

In the style of Mr. Burns’s documentaries, “Flannery” uses interviews, archival footage, photographs and voice actors (Mary Steenburgen reads as Ms. O’Connor) to tell the story of her life, writings and faith in the face of racism, sexism and her struggle with lupus. Ms. O’Connor’s iconic stories are also brought to life through motion graphics, created by a team of female animators.

Dr. Bosco and Dr. Coffman will receive their award at a ceremony at the Library of Congress in Washington on Thursday, a day before their film has its world premiere at the Hot Springs Documentary Film Festival in Arkansas. The doc will then go on to screen at the New Orleans Film Festival and the Austin Film Festival later this month.