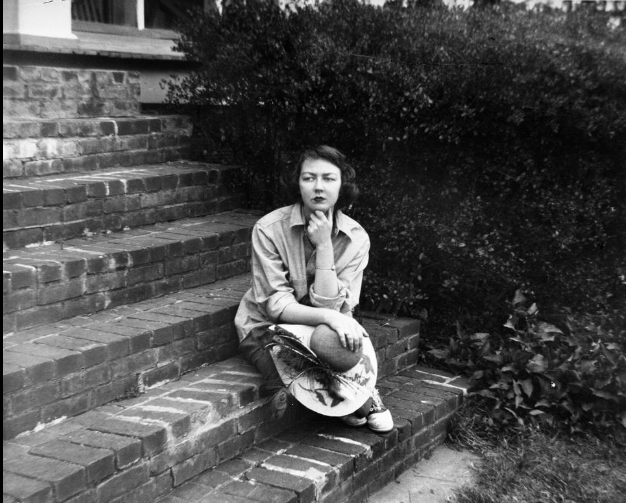 SouthCoast Today: Of Ken Burns, Flannery O’Connor and life in these complicated times

Columns share an author’s personal perspective and are often based on facts in the newspaper’s reporting.

Last week, we talked about the first-ever Library of Congress Lavine/Ken Burns Prize for Film, which aims to help up-and-coming filmmakers with a $200,000 finishing grant to help with the final production.

“Flannery,” a documentary about the late great American writer Flannery O’Connor — directed by Elizabeth Coffman and Mark Bosco — just won the inaugural award. The award is made possible by the generosity of Boston philanthropists Jeannie and Jonathan Lavine.

The film explores the life and writings of the Southern writer, “whose provocative, award-winning fiction … and an assemblage of unique and often fantastic characters has inspired artists, musicians and writers around the world,” according to the release.

I’m over the moon about this news.

Because a good film or show — whether it’s fictional like “Game of Thrones” or a Ken Burns’ documentary on country music — tends to pull people toward the source material.

And Flannery deserves some limelight.

Especially in this divisive time in our country.

Burns told me highest praise you can give a documentary is to say it makes you want to read the source material.

And after he watched “Flannery,” “I went out and got all the books of (O’Connor’s) I didn’t already have. It made me want to reread O’Connor,” the New Hampshire resident said.

This award recognizes filmmakers “whose documentary uses original research and compelling narrative to tell stories that touch on some aspect of American history.”

Burns told me they wanted the award to deal with American history, “in a fashion that was non-partisan. We weren’t interesting in underwriting screeds of either polarity.”

From “The Civil War” to “Baseball,” that’s dead on.

“Particularly now, when we seemed to have lost our way, and forgot the common story we do share, (films are) a tiny little way we can re-remind of us of why we Americans agree to cohere,” Burns told me. “And I think it’s because we’ve got a complicated and messy and wonderful and inspiring history.”

The late great Southern writer’s bread and butter were stories that explore and expose the dark side of humanity, the complicated South in particular.

“It’s about a woman who writes books and poems, a woman from the South who was afflicted with lupus, and was severely disabled by this crippling disease, who dealt very candidly and progressively about issues of race in the South,” Burns, 66, told me.

“The film has got really interesting touches. There’s archival material, there’s first-person voices reading Flannery’s voice, but there’s also animation and a kind of wonderful playfulness and inventiveness about the life of this extraordinary person,” he said.

Mary Flannery O’Connor was born in Savannah, Georgia in 1925. She died just 39 years later of lupus.

In her short life, she produced two brilliant novels— “Wise Blood” (1952) and “The Violent Bear It Away” (1960) — along with staggeringly good short stories.

If you’ve never read her, or haven’t since high school, start with her most anthologized short story: “A Good Man is Hard to Find.” Mindblower.

The two stories I mentioned above, “Good Country People” and “Revelation” contain lines that are punches to the gut. O’Connor poked her finger in the wound that was racism and race relations, class lines, in the South, especially in the ’50s and ’60s.

Three key collections: “A Good Man Is Hard to Find and Other Stories” (1955); the posthumous “Everything That Rises Must Converge” (1965) and the 1972 U.S. National Book Award for Fiction winner, “The Complete Stories.”

One of my favorite O’Connor moments comes from “Good Country People.”

There’s Hulga, a woman with a wooden leg and a chip on her shoulder; she has multiple college degrees in Philosophy, and thinks herself smarter than religious folks because she’s an atheist. A country boy Bible salesman tells her:

“You ain’t so smart, I been believing in nothing ever since I was born.”

“Flannery” is “a super thoughtful film,” Burns told me. “I love how certain the narrative was, how much it was willing to tolerate contradictions, but at the same time have a confidence in its storytelling, and be willing to try these other things like animation to help fill in the gaps imaginatively.”

Coffman was at home when the Library of Congress called.

“I thought that there was something wrong with our copyright application,” she told me.

Then Burns called her.

Bosco, one of the filmmakers and a Jesuit priest, told me this week that winning the prize was “surreal.

“When Elizabeth called me to tell me she just got off the phone with Ken Burns, I was at first shocked — how did this happen? And then I thought —good for us but even more so: good for Flannery!”

I asked how the film got started.

“I have been obsessed with Flannery O’Connor for a long time,” said Bosco. “In 2007, I was given some important archival interviews of people close to Flannery O’Connor… by my friend, film producer Christopher O’Hare. He gave them to me to see if I would ever want to do a film on O’Connor using these interviews. So in 2011, I asked my friend and colleague Elizabeth to help me.”

“White privilege and the racism that erupts from people who are both economically and perhaps educationally ‘challenged’ is an ongoing American story,” Coffman said.

Bosco added that O’Connor’s “stories are like modernist parables, filled with grotesque characters who are often oblivious to their own failings.

“O’Connor was a devout and intellectual formed Roman Catholic; a person of white privilege in the Jim Crow South; a serious fiction writer in a male world of writers and publishers; and a person challenged by disability. You see these converge in her stories of dysfunctional families caught in the cultural conflicts of race and class conflict. Her work portrays narratives of cultural conflict in a nation that was — and still is — haunted by religious belief.”

“Flannery really observes and hears the South — its accents and its manners,” he said. “She has this amazing ability to bring to life the banter of her Southern characters at a time in the 1950s and 60s when much of Southern banter was filled with racism. The way that Flannery is coming to terms with the growing civil rights movement in her stories — and in her personal life — is very much a reminder to us in our present time.”

So who was Flannery O’Connor?

“O’Connor was a precocious, hilarious, only child who was a creative writer from age five onwards,” Coffman says. “But O’Connor’s early experiences with mortality and with lupus — her father died from lupus when she was 15; she was diagnosed at 25— are an equally important part of her creative story. The third ‘leg’ of O’Connor’s story is her religious devotion and commitment to Catholicism. So death, humor and religion, set in the south — that southern “gothic” cocktail.”

As for her favorite O’Connor works?

“I just reread ‘The Violent Bear It Away’ recently, which, like ‘Wise Blood,’ knocks me out for a while,” she said. “I love ‘The Habit of Being’ and lots of O’Connor stories depending on my mood — ‘Good Country People,’ ‘The Displaced Person,’ ‘A Late Encounter with the Enemy’ are all favorites right now. ‘A Good Man is Hard to Find’ is simply part of my Southern heritage and in a category all its own.”

Lauren Daley is a freelance writer and book columnist. Contact her at ldaley33@gmail.com. She tweets @laurendaley1. Read more at https://www.facebook.com/daley.writer.