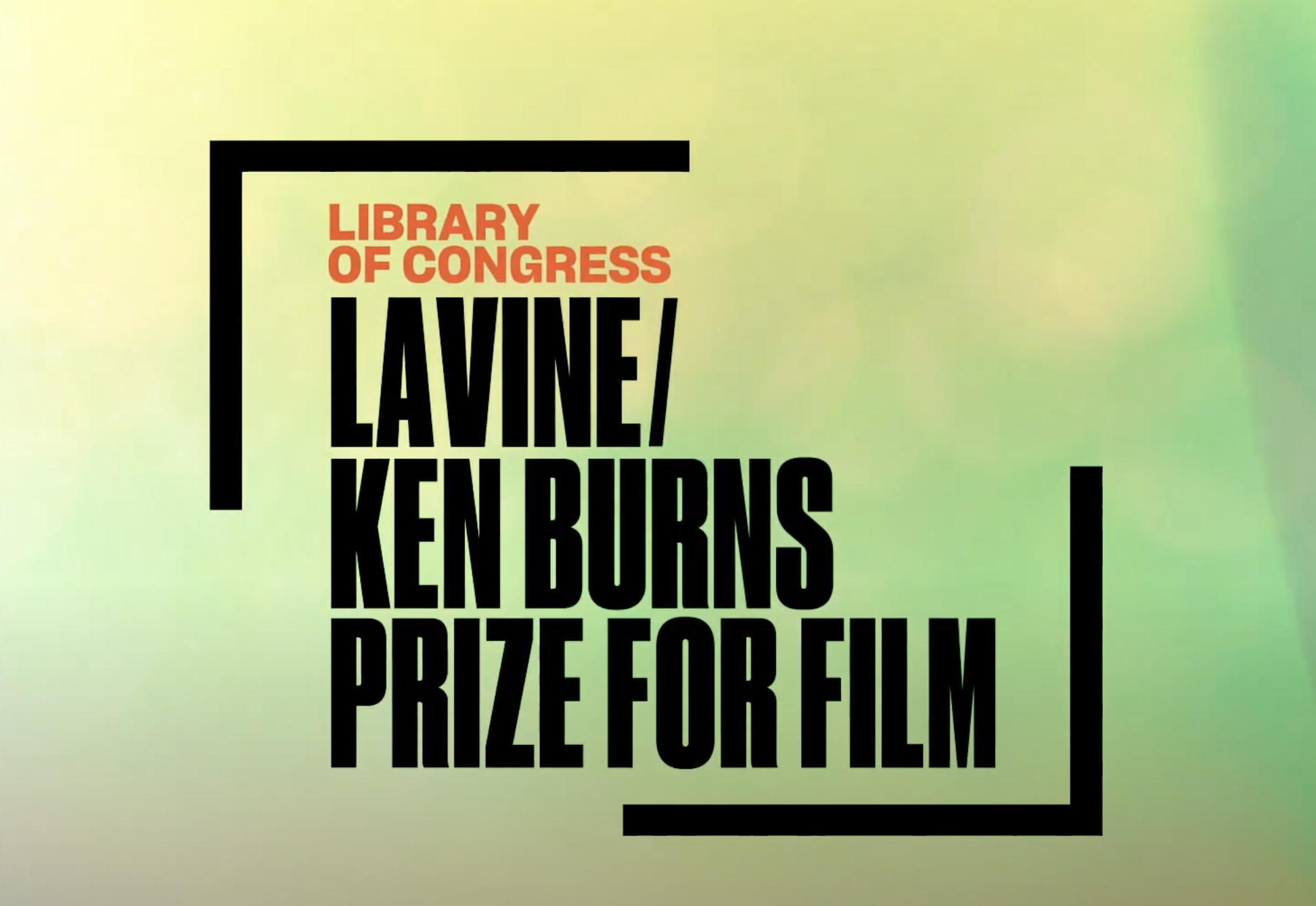 Washington, DC – February 22, 2022 – The Better Angels Society, the Library of Congress, and the Crimson Lion/Lavine Family Foundation today announced that entries are being accepted for the fourth annual Library of Congress Lavine/Ken Burns Prize for Film, which recognizes exemplary accomplishment in historical documentaries.

The award, which was established in 2019, recognizes one late-stage documentary that uses original research and compelling narrative to tell stories that bring American history to life using archival materials. The prize is presented each fall at a ceremony with Members of Congress at the Library of Congress, and the winner receives a $200,000 finishing grant to help with the final production and distribution of the film. In addition, one runner-up receives a grant of $50,000 and three to four finalists each receive $25,000. The funds are to be used for finishing, marketing, distribution, and outreach.

“We live in a time where history seems to be pounding down on us,” said Ken Burns.  “Each moment strikes us as new and unique. Understanding what came before us provides both a healthy respite as well as greater perspective on what we are experiencing now.  Documentary filmmakers have also expanded our understanding of the past and have shared stories that tell a much fuller picture of who we are as a people and a country. I am very grateful to Jonathan and Jeannie Lavine, the Library of Congress and The Better Angels Society for recognizing how film can help us better understand the past and provide us with tools to have more civil conversations about the challenges we face today.”

“History lives in the present,” said Carla Hayden, Librarian of Congress. “It is in the news footage, photographs, words and songs that we collect at the Library of Congress. Filmmakers weave these resources to tell the stories about who we are. They help us understand the past – and entertain us – but also provide a much greater depth to the present. We are so excited about this year’s call for films. There’s such an abundance of talent working in documentary film right now and their work is changing how we think about the past – and how we gain access to it.”

In 2020, the award was expanded to include The Better Angels/Lavine Fellowship, which selects five filmmakers who are telling stories that focus on America’s diversity. Each receives support and mentorship as they work on their films. The Fellows are selected from the pool of applicants to the Library of Congress Lavine/Ken Burns Prize for Film who demonstrate significant potential.

Since 2019, when the award started, more than $1.5 million has been distributed among filmmakers. Winning films have included FLANNERY (Directed by Elizabeth Coffman and Mark Bosco, S.J.); HOLD YOUR FIRE (Directed by Steven Forbes); GRADUALLY, THEN SUDDENLY: THE BANKRUPTCY OF DETROIT (Directed by Sam Katz and James McGovern).  These – and other winning films – have gone on to have theatrical releases, to be included and recognized at major festivals, and to air on PBS and other platforms. Most recently, following its premiere at this year’s Sundance Film Festival, 2021 award runner-up FREE CHOL SOO LEE (Directed by Julie Ha and Eugene Yi) was acquired by Mubi for a 2022 theatrical release, and The Better Angels/Lavine Fellowship recipient FANNIE LOU HAMER’S AMERICA (Directed by Joy Elaine Davenport) is set to air on PBS on February 22, 2022.

“As we enter our fourth year with The Library of Congress Lavine/Ken Burns Prize for Film, we are thrilled at the response we have received to date and the quality and diversity of the films and storytelling,” said Jeannie and Jonathan Lavine, who provided the funding to The Better Angels Society to endow this award through the Crimson Lion/Lavine Family Foundation. “There’s a great hunger for understanding the past and stories that are grounded in research. Film allows us to engage with the past in a way that is gripping and enlightening. They also spark conversations that are critical to how we understand the present.” Jeannie Lavine has served on a number of national boards including The Better Angels Society’s Board of Directors. Jonathan Lavine is the Co-Managing Partner of Bain Capital, a Co-Chair of the Trustees of Columbia University, and Chair Emeritus of City Year.

“Historical documentaries are essential to understanding our history, examining our past and building a national discourse on what defines us as Americans,” said Courtney Chapin, Executive Director of The Better Angels Society. “We are proud to have established the Library of Congress Lavine/Ken Burns Prize for Film and to support a growing field of outstanding documentarians.”

To be eligible for the award, films must be submitted by June 1, 2022 and meet several criteria, most notably films must be late-stage documentaries with a running time of 50 minutes or longer focused on American history. For more information about the submission guidelines, visit www.thebetterangelssociety.org.

The 2022 Internal Review Committee will be chaired by Lynn Novick (COLLEGE BEHIND BARS) and will include Florentine Films’ Geoffrey C. Ward and Salimah El-Amin as well as expert representatives from the Library of Congress.

The Prize is also supported by an esteemed Honorary Committee comprised of thought leaders drawn from all corners of the media and cultural landscape, united by a common interest in supporting work that highlights our country’s history through documentary film.

Ken Burns has been making documentary films for over forty years. Since the Academy Award nominated BROOKLYN BRIDGE in 1981, Ken has gone on to direct and produce some of the most acclaimed historical documentaries ever made, including THE CIVIL WAR; BASEBALL; JAZZ; THE WAR; THE NATIONAL PARKS: AMERICA’S BEST IDEA; THE ROOSEVELTS: AN INTIMATE HISTORY; JACKIE ROBINSON; THE VIETNAM WAR; and COUNTRY MUSIC. Future film projects include BENJAMIN FRANKLIN, AMERICA AND THE HOLOCAUST, THE AMERICAN BUFFALO, LEONARDO DA VINCI, THE AMERICAN REVOLUTION, EMANCIPATION TO EXODUS, and LBJ & THE GREAT SOCIETY, among others. Ken’s films have been honored with dozens of major awards, including sixteen Emmy Awards, two Grammy Awards and two Oscar nominations; and in September of 2008, at the News & Documentary Emmy Awards, Ken was honored by the Academy of Television Arts & Sciences with a Lifetime Achievement Award.

Jeannie and Jonathan Lavine established the Crimson Lion/Lavine Family Foundation to focus a significant portion of their philanthropic efforts toward leveling the playing field for individuals and families. The Foundation works to address pressing social challenges in the areas of education, community and public service, health and welfare, and discrimination and poverty. The Foundation supports the multi-disciplinary efforts of organizations that serve to strengthen society through research, innovation, public policy, direct service, and advocacy.

The Library of Congress is the world’s largest library, offering access to the creative record of the United States — and extensive materials from around the world — both on-site and online. It is the main research arm of the U.S. Congress and the home of the U.S. Copyright Office.      Explore collections, reference services and other programs and plan a visit at loc.gov, access the official site for U.S. federal legislative information at congress.gov and register creative works of authorship at copyright.gov.