College Behind Bars to Air on PBS in November 2019

COLLEGE BEHIND BARS TO AIR ON PBS IN NOVEMBER 2019 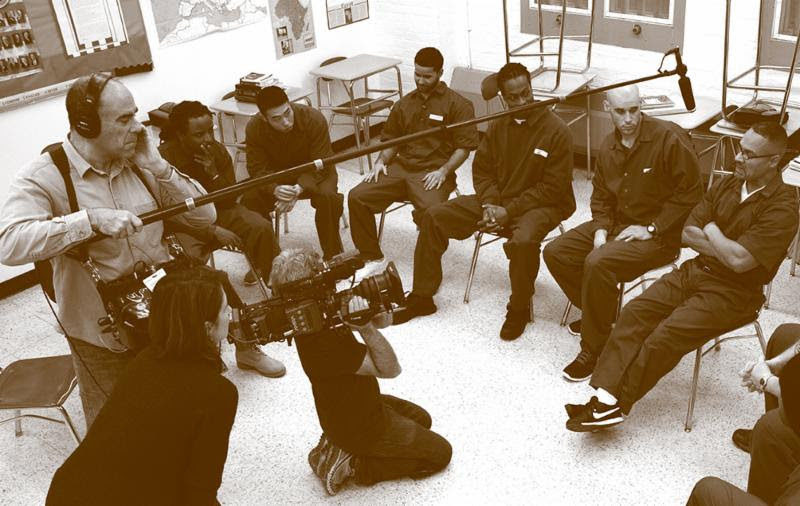 PASADENA, CA; February 1, 2019 — Alfred I. duPont-Columbia and Peabody-Award winning filmmaker Lynn Novick (THE VIETNAM WAR, PROHIBITION, FRANK LLOYD WRIGHT, THE WAR) has directed and produced a new documentary series, COLLEGE BEHIND BARS, that reveals the transformative power of higher education through the experiences of incarcerated men and women, PBS announced today during the Television Critics Association Winter Press Tour. The four-hour series directed and produced by Novick and produced by longtime collaborator Sarah Botstein (THE VIETNAM WAR, PROHIBITION, THE WAR, JAZZ), will air on PBS in November 2019.

COLLEGE BEHIND BARS marks a new path for Novick, who is best known for history films directed with Ken Burns. The four-hour series, distilled from nearly 400 hours of cinéma-vérité footage, explores the lives of a dozen incarcerated men and women as they struggle to earn degrees in the Bard Prison Initiative (BPI), one of the most rigorous and effective prison education programs in the country.PASADENA, CA; February 1, 2019 — Alfred I. duPont-Columbia and Peabody-Award winning filmmaker Lynn Novick (THE VIETNAM WAR, PROHIBITION, FRANK LLOYD WRIGHT, THE WAR) has directed and produced a new documentary series, COLLEGE BEHIND BARS, that reveals the transformative power of higher education through the experiences of incarcerated men and women, PBS announced today during the Television Critics Association Winter Press Tour. The four-hour series directed and produced by Novick and produced by longtime collaborator Sarah Botstein (THE VIETNAM WAR, PROHIBITION, THE WAR, JAZZ), will air on PBS in November 2019.

The four-part film, broadcast over two consecutive nights in November, unfolds without narration through an intimate look at the lives, experiences and words of incarcerated men and women and their families. Working with renowned cinematographers Buddy Squires, ASC, and Nadia Hallgren, Novick and producer Botstein received unprecedented access to film for four years inside maximum and medium security prisons in New York State. The film, edited by Tricia Reidy, ACE, takes viewers on a stark and emotionally intense journey into one of the most pressing issues of our time – our failure to provide meaningful rehabilitation for the millions of Americans living behind bars. Executive produced by Ken Burns, COLLEGE BEHIND BARS is Novick’s solo directorial debut.

In this era of mass incarceration, America is the world’s largest jailer, with more than 2 million men and women behind bars; 630,000 are released annually, and nearly 50 percent end up back in prison within five years, trapped in a cycle of imprisonment, release and re-incarceration. As one BPI student says on camera, “Prison is to punish. It’s not about creating productive beings. Individuals are not being prepared for anything other than what they’ve already been doing – crime.”

“This film challenges conventional wisdom about education and incarceration, and raises questions we urgently need to address,” Novick said. “What ultimately is prison for? Who in America has access to educational opportunity? Who among us is capable of academic excellence? How can we break the cycle of recidivism? How can we have justice without redemption?”

COLLEGE BEHIND BARS is not a story of non-violent drug offenders, false conviction or exoneration, unlike many recent documentary films about the criminal justice system. All of the BPI students featured in the film are serving time for serious, often violent offenses. In wrenching, deeply personal interviews, they describe their childhoods and family backgrounds, reveal why they are incarcerated, express profound remorse, as well as hope for redemption and their worries about what life will bring after release from prison.

“COLLEGE BEHIND BARS puts a human face on the millions of Americans whose lives are erased from public view when they enter prison,” producer Sarah Botstein said, “and raises questions about whether our criminal justice system is doing enough to prepare incarcerated men and women to re-enter society and become productive citizens, especially in a country that believes in second chances.”

Executive producer Ken Burns added, “Lynn has provided us with a transformative story about the power of education and how it can change lives and also benefit society at large. Programs like the Bard Prison Initiative are sorely lacking in our criminal justice system. COLLEGE BEHIND BARS could not be coming out at a more perfect time.”

“COLLEGE BEHIND BARS provides us with an intimate look at how learning can change lives and create hope,” said Perry Simon, PBS Chief Programming Executive and General Manager, General Audience Programming. “The filmmakers have allowed us to witness these incarcerated men and women in the process of becoming, in their own words, ‘civic beings.’ We’re very excited to share this work with the American public through our local PBS member stations.”

Once commonplace in American prisons, higher education declined precipitously after 1994, when Congress ended federal Pell Grants for inmates as part of the Clinton Crime Bill. For more than two decades, as “tough on crime” policies made America the world’s leading jailer, there was almost no federal or state funding for college in prison, despite its proven efficacy in preventing recidivism. In the nearly 20 years since BPI began, more than 500 alumni have been released, and fewer than four percent have gone back. The program currently enrolls 300 men and women in six prisons, and costs $6,000 per student per year, most of it privately funded.

COLLEGE BEHIND BARS shows BPI students – most of whom did not finish high school – being held to the same high academic and intellectual standards as the undergraduates at Bard, a private liberal arts college in upstate New York. In classrooms, their cells, the library and the yard, they wrestle with difficult texts, analyze complex data and, over time, master a wide range of disciplines. Throughout the series, the filmmakers also follow the ups and downs of BPI’s Debate Union, which lost to a visiting team from West Point in the first year of filming, and six months later, beat a team from Harvard, creating a media sensation that went viral. For many of the students featured in the film, the culmination of their education is the year-long Senior Project. To complete the bachelor’s degree, they conduct original research and produce a final paper of 80 to 100 pages.

About PBS
PBS, with nearly 350 member stations, offers all Americans the opportunity to explore new ideas and new worlds through television and digital content. Each month, PBS reaches over 90 million people through television and 30 million people online, inviting them to experience the worlds of science, history, nature and public affairs; to hear diverse viewpoints; and to take front row seats to world-class drama and performances. PBS’ broad array of programs has been consistently honored by the industry’s most coveted award competitions. Teachers of children from pre-K through 12th grade turn to PBS for digital content and services that help bring classroom lessons to life. Decades of research confirms that PBS’ premier children’s media service, PBS KIDS, helps children build critical literacy, math and social-emotional skills, enabling them to find success in school and life. Delivered through member stations, PBS KIDS offers high-quality educational content on TV – including a 24/7 channel, online at pbskids.org, via an array of mobile apps and in communities across America. More information about PBS is available at www.pbs.org, one of the leading dot-org websites on the internet, or by following PBS on Twitter, Facebook or through our apps for mobile and connected devices. Specific program information and updates for press are available at pbs.org/pressroom or by following PBS Pressroom on Twitter.

For images and additional up-to-date information on this and other PBS programs, visit PBS PressRoom at pbs.org/pressroom.